Her Life Spared by Happenstance, 1944

My parents, Johannes and Elfriede Hoeber,  were fortunate in escaping Nazi Germany.  The story of how they got out in 1938-1939 is the subject of the book Against Time: Letters from Nazi Germany, 1938-1939 to be published next year.  Not all of their friends were as fortunate as they.  When I was working on the book, I found a letter among my parents’ papers that told the astonishing story of a close friend of theirs.  The letter was written to my father in 1960, during the time when Adolf Eichmann was on trial in Jerusalem. 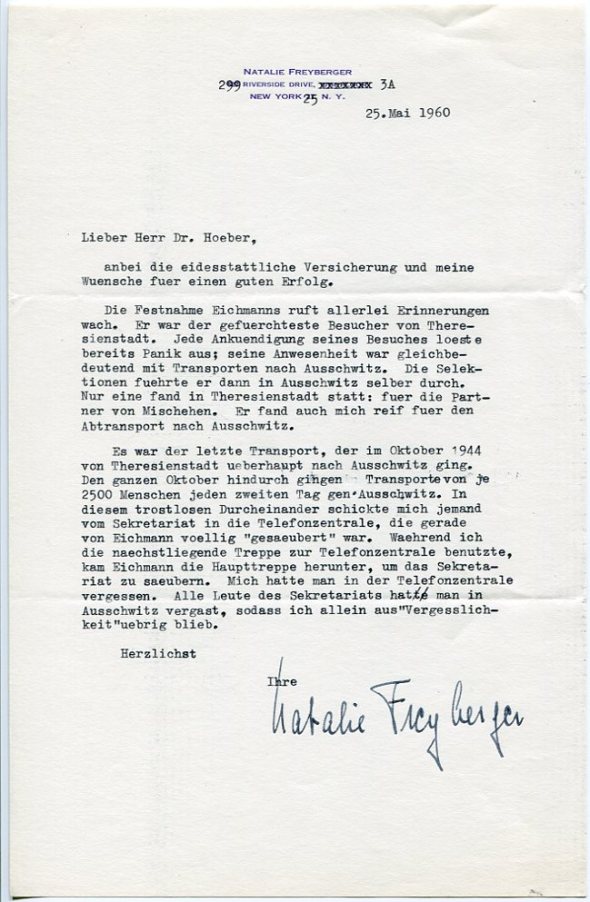 Letter from Natalie Freyberger to Johannes U. Hoeber, May 25, 1960.

Natalie Freyberger was a bright young woman who lived in Düsseldorf when my parents did.  She worked part time for Johannes and Elfriede as a secretary in their small newspaper distribution business (the Nazis having expelled my father from his government post years earlier).  Because she was completely reliable, Johannes and Elfriede could leave Frau Freyberger in charge of the business for a couple of weeks when they had to be away.  Like many of Johannes and Elfriede’s friends, Frau Freyberger was Jewish. Early in 1939, her non-Jewish husband divorced her under the Nuremberg laws, which made marriages between Jews and non-Jews illegal.  Frau Freyberger desperately wanted to leave Germany but was unable to do so because she couldn’t find a country that would let her in.  Some time after my parents left Germany, Frau Freyberger was arrested and transported to the concentration camp at Theresienstadt.  The story of how she managed to survive is told in the letter she wrote my father many years later:

Eichmann’s arrest has aroused all sorts of memories.  He was the most feared visitor to Theresienstadt.  Every time there was an announcement of his visit it set off a panic; his presence meant the same thing as transports to Auschwitz.  He then carried out the selections himself in Auschwitz.  Only one of them took place in Theresienstadt:  for the spouses of mixed marriages.  He found me suitable for removal to Auschwitz too.