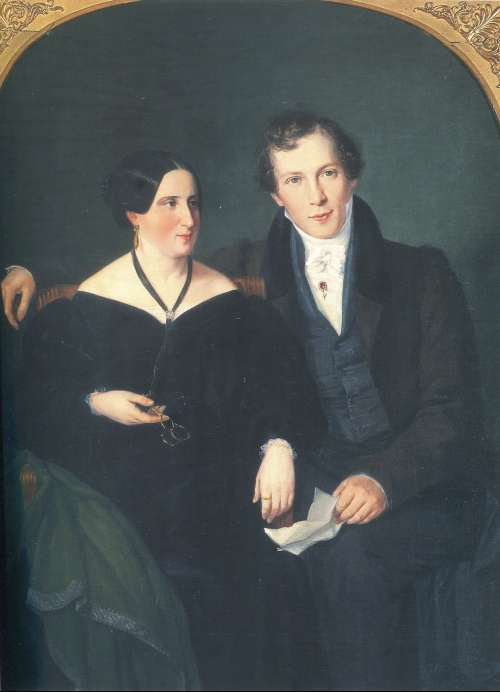 Moritz Daniel Oppenheim and his first wife, Adelheid Cleve, 1829 (self portrait). Nothing in their dress or demeanor distinguishes them visually from others in Germany’s rising bourgeoisie of the period.

Minority groups in any society continually negotiate a balance between maintaining their distinct identity and fitting into the larger society in which they live.  In the United States, this negotiation has been repeatedly managed by immigrant groups, including Irish, Italian and Eastern Europeans in the 19th century and East and South Asians, Middle Easterners and myriad Latinos today.  Jews in Germany in the 1800s faced similar social negotiations. At the beginning of the century, Jewish mobility was tightly restricted and their lives were often segregated from the majority community.  A hundred years later, however, Jews were leaders in countless fields in Germany, including literature, the arts, science, the professions and business.  Prejudice and discrimination persisted, but the progress over the century was remarkable.

As German Jews entered the middle and educated classes, they faced the conundrum of maintaining their distinctive customs and beliefs while sharing the benefits and liberal values of participation in a broader, more diverse, modern society. In the second half of the 19th century, the domestic art of my great-great-great grandfather’s brother, Moritz Daniel Oppenheim, portrayed a credible balance between these competing objectives.  You can read a prior post about him here. His series depicting Jewish life became wildly popular.  They started as black-and-white paintings that were photographically converted to lithographs. The set sold thousands of copies in many editions. 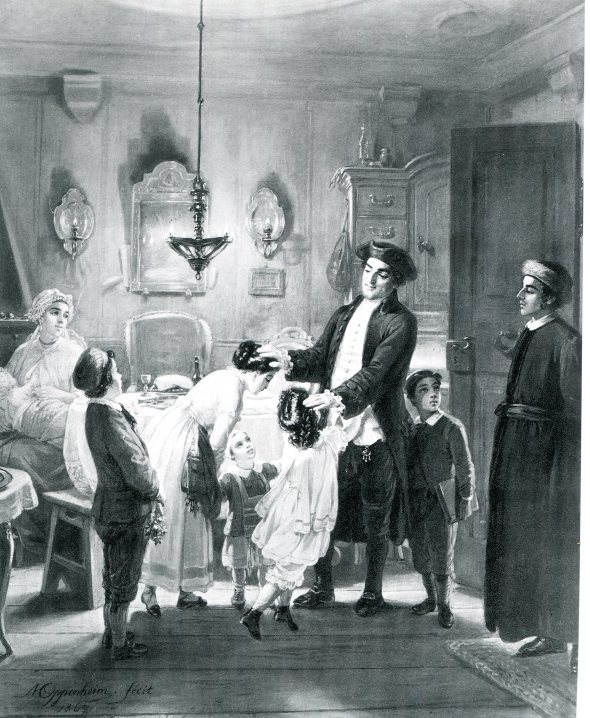 Moritz Daniel Oppenheim, Freitag Abend [Friday Evening], 1867. The father returns from the synagogue for the Sabbath meal with his family.

Close family relations, benevolent gender roles, respectful children, education, hospitality, formal mealtimes, well-made but not opulent furnishings and clothing — these were all esteemed values of German middle class life when Moritz painted this illustration in 1867. He dressed the figures in clothing from a century earlier – perhaps suggesting that the Jewish exoticism pictured was explicable as an anachronism. The artistic style, however, is a mid-19th century domestic genre scene. Except for the figure on the right and the Sabbath lamp hanging over the table, this could be many idealized German homes of Oppenheim’s day. The father blesses his daughters while his wife nurses the baby.  Three boys stand respectfully; one holds a book while observing the Sabbath guest, a religious student in foreign dress.  The Sabbath bread lies under a napkin waiting for the family to sit and eat together. For both Jewish and Gentile audiences, this image  conveys strong nineteenth-century family values held in common by the majority and minority populations.

Aside from the males’ skullcaps and the Sabbath lamp in the center of the room, this illustration could be an idealized scene of Christian piety on a Sunday afternoon in the mid-1800s. It is, however, a Jewish home on a Saturday. While the father dozes, the sons and daughters read and study.  No doubt their books are religious or moral texts.  The good but not extravagant clothes and furnishings and the domestic tranquility convey that this is a gutbürgerlich, solid middle class, pious German home. 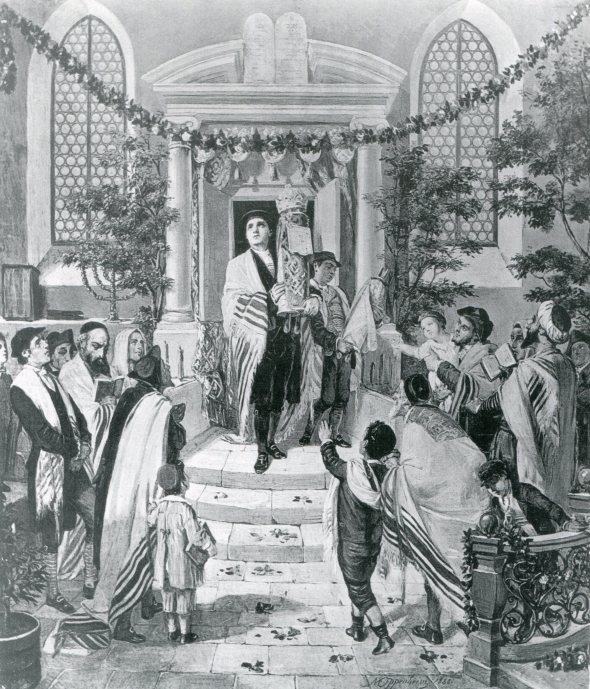 Once in a while, Moritz Oppenheim would allow his illustrations of Jewish life to convey greater distinctiveness than others. In this portrayal of Shavuot, the men wear prayer shawls (Talit) and the central figure carries a richly decorated Torah.  The Gothic-arched windows of the synagogue and the tablets of the Ten Commandments over the door, however, would connote a religious environment familiar to German Christians of the time.  What this image has most in common with Christian illustrations of the time is the attentive, prayerful, eyes-upraised piety of all the participants, including children.

Moritz Daniel Oppenheim, Die Jahrzeit (Minjan) [Minyan], 1871. Jewish soldiers interrupt the war to observe Jahrzeit, the anniversary of the death of one of the soldiers’ father.

Jews showed their German patriotism by volunteering for the army in the Franco-Prussian War of 1870-1871. In this scene, ten German-Jewish soldiers – officers and enlisted, infantry and medical corps, battle-ready and wounded – pause in the war to observe the anniversary of the death of the father of one of their number, the man third from right with a prayer shawl.  The place is a commandeered home in a French village. The crucifix hung on the back wall by the French family has been covered with a cloth for this occasion but remains part of the scene. French girls observe the unusual ceremony through the window.  The  message is one of German loyalty and communal piety, so the soldiers at prayer are simultaneously unified with and and yet different from German society as a whole. 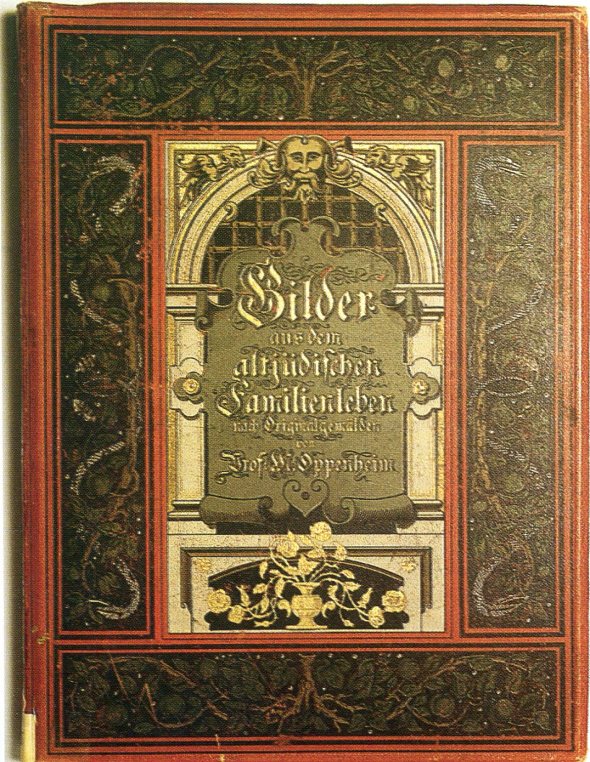 The first portfolio of Oppenheim’s lithographs with six images was published in 1866 and was followed by numerous later editions with additional plates.  Thousands of the sets were sold . The huge 1901 edition pictured, measuring nearly 2 feet by 3 feet, included 20 large prints.  Oppenheim’s lithographs, with their multilayered meanings, decorated Jewish homes across Europe for decades.  They can be seen at the Jewish Museum in New York and at the Philadelphia Museum of Jewish Art housed in the historic Rodeph Sholem Synagogue.

More stories about the Höber  family are in Against Time: Letters from Nazi Germany, 1938-1939, published by the American Philosophical Society. Information is available here. Also available at Amazon.com.

This entire blog is available in book form. Send a note to the author through the comments section below.