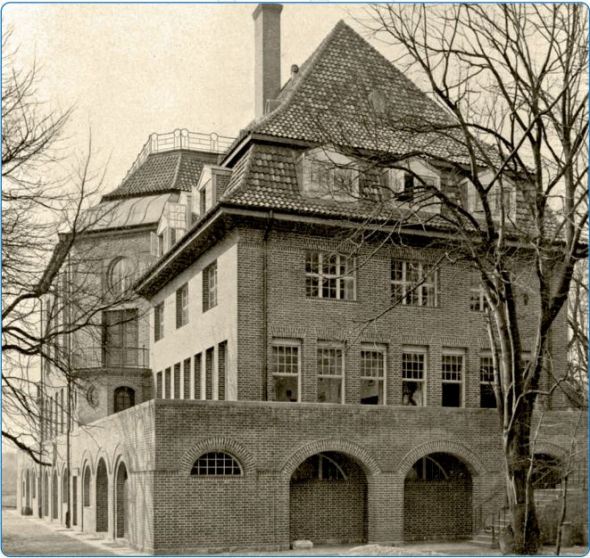 The following account is based on documents I recently received from the Schleswig-Holstein State Archives in Schleswig, Germany.  I am indebted to my friend, archivist Dagmar Bickelmann, who  has been endlessly helpful in locating records relating to my grandfather’s time at the University of Kiel.

My grandfather, Rudolf Höber (1873-1953), was elected Rektor (Chancellor) by the faculty of the University of Kiel in March 1930.  Shortly after his installation, the university community  was shaken when the local chapter of the National Socialist German Student Association forcibly disrupted a lecture by the distinguished professor of international law, Walther Schücking (1875-1935).

Schücking had served in 1918 as a German delegate to the Versailles peace conference that ended World War I.  Thereafter, he became a strong advocate for the League of Nations, the international organization dedicated to ending war, and spoke often on the struggle for world peace.  On Monday, May 26, 1930 he was scheduled to speak in the ceremonial hall of the Seeburg, the student center on  Kiel Harbor. His lecture was entitled “The Moral Idea of the League of Nations.”  The Nazis opposed the League of Nations, just as they opposed “pacifism.” They claimed that ending war and supporting the League would cause Germany to live for decades under the onerous terms of the Treaty of Versailles, which they believed could be reversed only by a new war.

Prof. Schücking’s lecture meeting was chaired by a distinguished panel of academics and jurists.  The Nazis packed the hall early, making it difficult for anyone else to find a seat.  When Schücking began to speak, the Nazis interrupted his presentation, shouting insults and catcalls. His discussion of the accomplishments of the League of Nations was derided by the audience and met with raucous laughter. As Schücking continued his lecture, the disruptions got louder.  During a discussion that followed Prof. Schücking’s talk, a Nazi party member, Schalow, screamed that the League was a fraud and that leaders who preached the “emasculating” doctrine of pacifism were cowards.  He claimed that the presiding panel was nothing but a bunch of Jews.  The panelists intervened vigorously in the debate.  A jurist condemned the “murderous activities of the SA,” the Sturmabteilung or Nazi Stormtroopers who often physically assaulted their opponents. Nazis screamed that one of the panelists was a member of the Reichsbanner, a pro-democracy militia of the Social Democratic party. When it became apparent that the most disruptive speaker, Schalow, was a student, one of the professors threatened to bring him before the university disciplinary tribunal for violation of the university’s code of behavior. This temporarily brought the meeting back under control.

Near the end of his talk, Prof. Schücking spoke critically of the political ineptness and rudeness of German political fanatics. The Nazis showed their displeasure by stamping their feet so loudly that the meeting had to be brought to a close.  Triumphant at having  prevented Prof Schücking from finishing his lecture, the Nazi students launched into a chorus of the Horst Wessel Lied, an anthem of the Nazi Party.  They finished the evening by standing, giving the Nazi salute, and shouting “Heil Hitler!” in unison.  In response, someone in the audience, possibly another professor, shouted “Pfui!,” in those days roughly the equivalent of yelling “Disgusting!” Someone else in the audience – according to the Nazis, an angry “German worker,” not a student – responded by punching that person in the face. The meeting thus came to a tumultuous end. 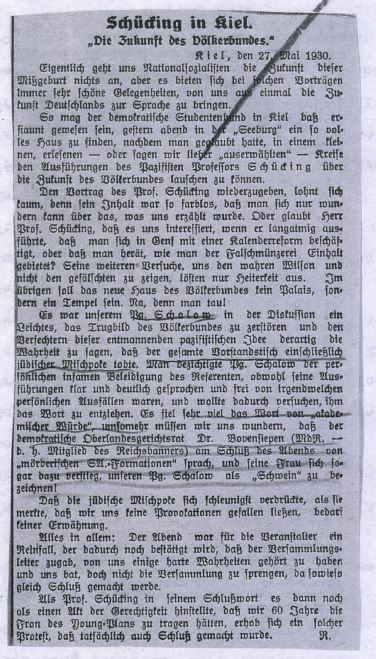 As it happened, the Nazi student group had reserved the same room in the Seeburg student center for a meeting of their own two days later, on Wednesday, May 28.  On the afternoon of the scheduled Nazi meeting, however, a notice was posted from Rektor Höber that read, “Because of the events on Monday evening … we hereby withdraw the permission previously granted for the use of the large hall for a National Socialist meeting.” 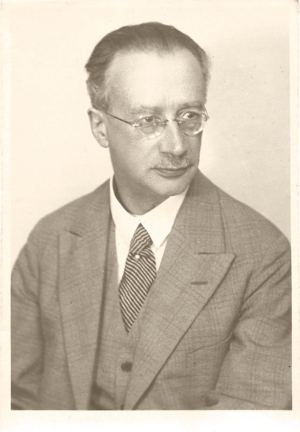 Rudolf Höber, Professor of Physiology and Rektor of the University of Kiel, around the time he banned the Nazi party from the University because of its disruption of free speech.

The president of the National Socialist Student Association, a student named Münske, went to the office the Rektor, who agreed to meet with him. Rektor Höber, however, refused to allow the Nazi meeting, in order to ensure there was no repetition of the violence of March 26.  In a letter to Rektor Höber three days later, Münske renewed his claim that the Nazis should not be held responsible for disrupting Prof. Schücking’s lecture and should not be excluded from use of the hall in the future.  Rektor Höber dictated a file memorandum noting that he would not respond to Münske’s letter, since he had discussed the matter with him  on May 28.  The memo included evidence showing the Nazis as a group to be responsible for breaking up the Schücking meeting. 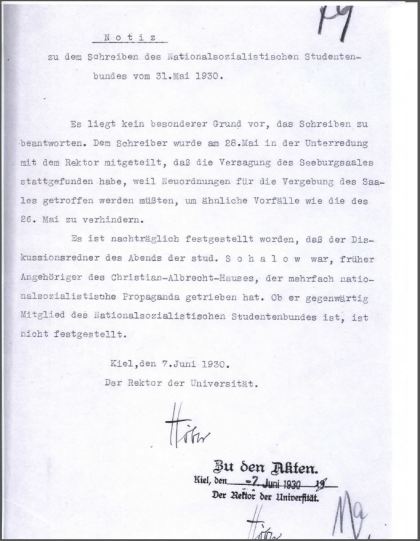 The Schücking affair was a marker in the advance of the Nazi assault on liberalism, internationalism and academic freedom of speech.  It was a precursor to  the Baumgarten affair five months later, when Nazi students disrupted a sermon of the liberal theologian Otto Baumgarten, branding him a pacifist, “Jew-lover” and traitor to the nation.  In response, Rektor Höber expelled the students involved and permanently banned the National Socialist German Student Group from the University campus.  This action was one of the factors held against Höber when the Nazis took control of the country in 1933, leading to his expulsion from the faculty and emigration to the United States.