If you’re pretty well educated in your birth country, it’s daunting to face a new country and become a person who knows less than anyone else.  So how do you catch up?  When my parents decided it was time to flee Nazi Germany, their answer was books.  I still have some of them.  I love this beautiful history of the United States, with its funky canvas dust jacket and the stars on the spine: 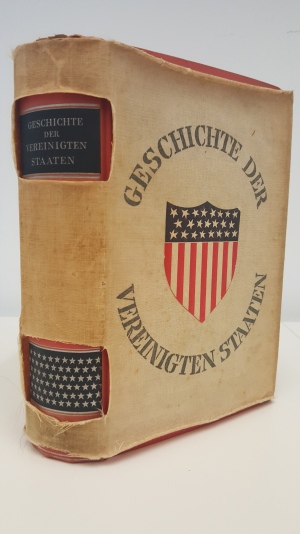 My mother’s mother gave her fleeing daughter and son-in-law this old Baedeker’s guidebook to the United States, in English.  The fold-out city maps are small but quite detailed.  Years later my mother fell in love with the Rand McNally Road Atlas, but in the beginning it was this Baedeker that got her and my father started on American geography:

Baedecker’s United States.  This fold-out map of Washington D.C. is one of 50 maps in the book. Click for larger image.

What do you give a bright eight-year-old to learn a bit about adventures in America?  The choices in Nazi Germany weren’t too great, but you could do worse than providing her with a German translation of an American classic — Huck Finn.  Susanne learned to love Mark Twain’s stories of life on the Mississippi well before she got here:

And how do you learn to raise children the American way? A couple years after arriving here, my parents were confronted with two new babies in short order — my brother and then me.  Fortunately, every American at the time followed the same child-rearing Bible, Dr. Spock.  That my mother referred to it frequently is shown by the tattered condition of this cheap paperback edition. She must have been comforted by the first eight words of the book, one of the most uplifting opening sentences of any book ever:  “You know more than you think you do.” The simplest reassurance imaginable.

German schools didn’t teach much about the American Revolution, so even educated immigrants didn’t know much about early American history.  A German friend who had arrived in America a couple of years earlier than my parents introduced them to the historical novels of Kenneth Roberts set in the American Revolution and the years of the Early Republic.  Roberts was a fine historian as well as a novelist, and my parents learned more than many Americans about our early history in a short time from his books.  Because of him they loved to visit historic sites in the U.S., starting with Valley Forge shortly after their arrival:

My mother, particularly, developed an interest in the history of Philadelphia.  She was fascinated to learn that in the early 20th century Philadelphia was governed by a German-American progressive named Rudolph Blankenburg.  At Leary’s huge used book store on 9th Street above Chestnut, she was able to by a book on Mayor Blankenburg, written by his wife, for half a dollar: 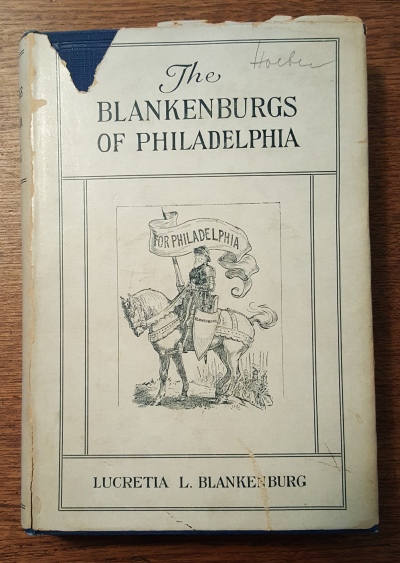 When my parents had been in the U.S. for some time, my mother acquired her great treasure, a copy of Scharf and Westcott’s magnificent three-volume History of Philadelphia, 1609-1884.  Standards of historical accuracy were different when this set was published, but it is still a wonderful source of anecdotes about the city in its first 275 years: 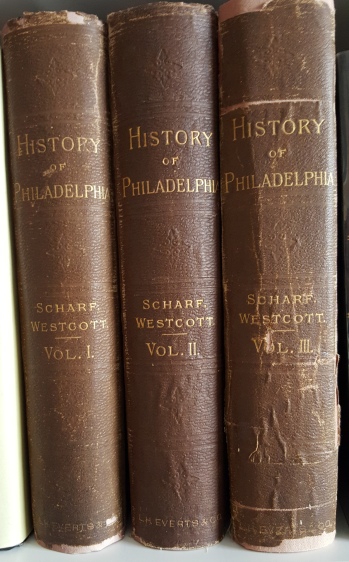 More on the Hoeber family is in the book Against Time: Letters from Nazi Germany, 1938-1939. Click here for details and ordering information.