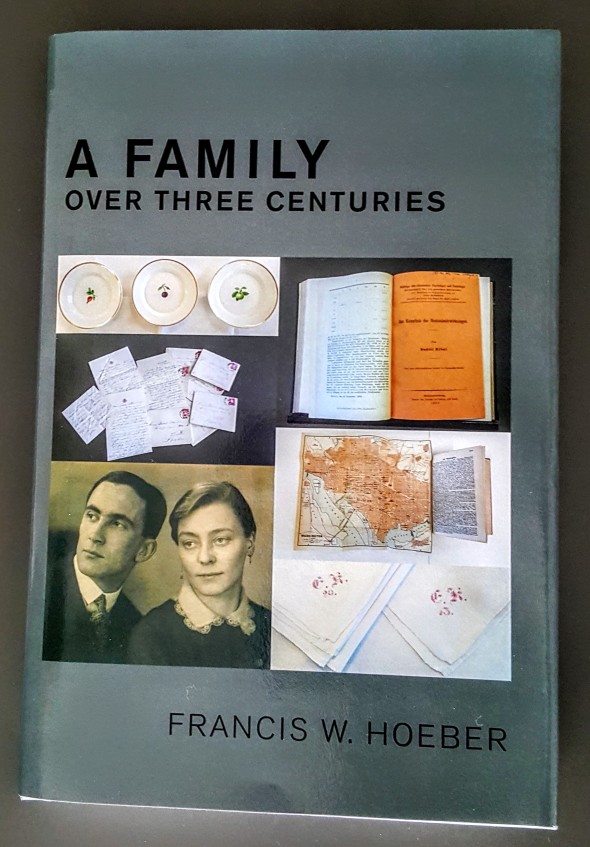 A FAMILY OVER THREE CENTURIES, privately printed, incorporates all 82 stories from this website, Hoeber:  A Family Over Three Centuries. Current technology makes it possible to print small quantities of this 300-page book with high quality images for a manageable price.  While the website provides the opportunity to reach many readers around the world, it is a different kind of pleasure to hold abook in your hand, scan the illustrations, and dip into a story that catches your eye at random. 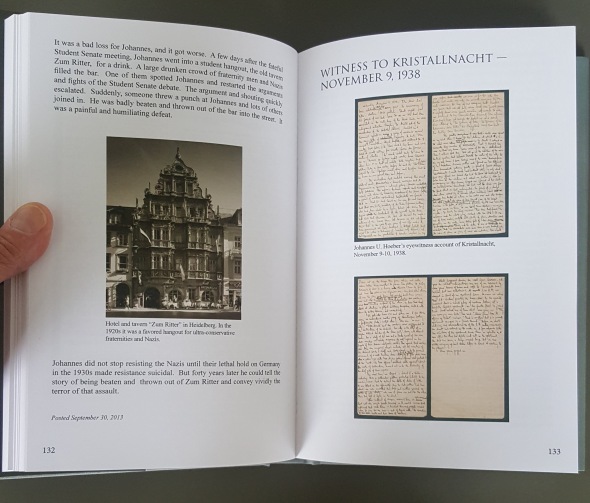 I prepared the book version primarily for family and friends. The process required reformatting the online material page by page using Indesign and Photoshop software, but the product is worth the effort.  The Blurb Books service that did the printing provides high quality reproduction of the text and illustrations. If any readers of this website would like a copy, I will have one printed for you for my cost of printing ($50 US) and postage (varies). Please contact me through the comments section below if you would like information about getting a copy. 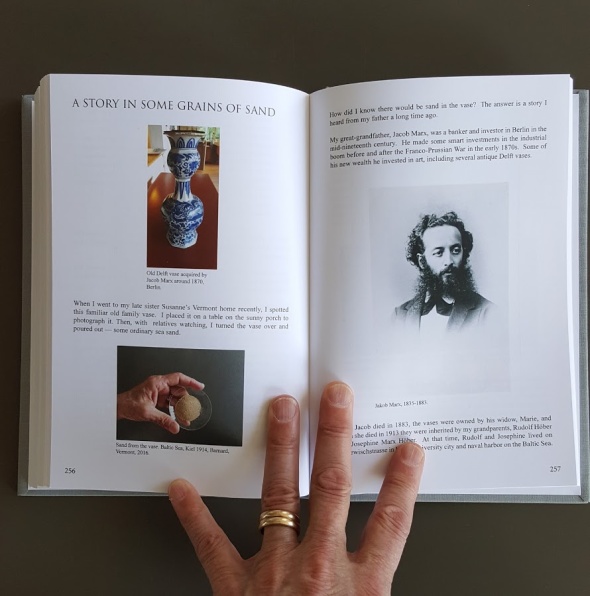 It is gratifying that the site has received more than 36,000 hits from nearly a hundred countries, from Algeria to Zambia.   I have become acquainted — and even friends — with dozens of historians, writers and other interested readers who have contacted me about the content of these stories.  The site has been in hiatus for some months as I have been preparing the book, but postings will resume in 2018. 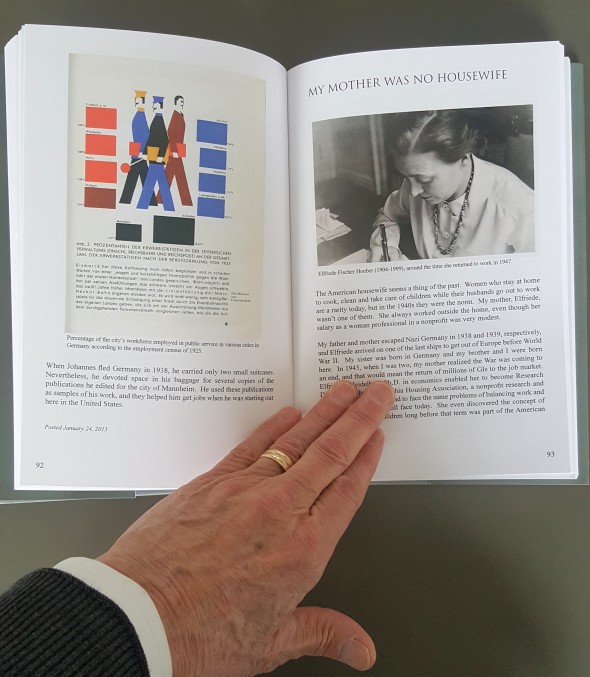 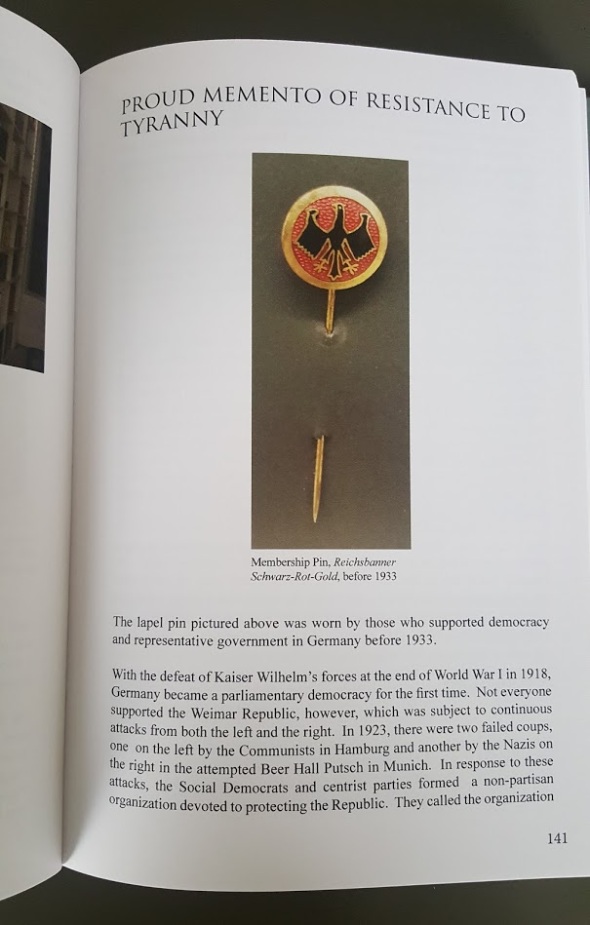 FOR ORDERING INFORMATION, PLEASE LEAVE A REPLY IN THE 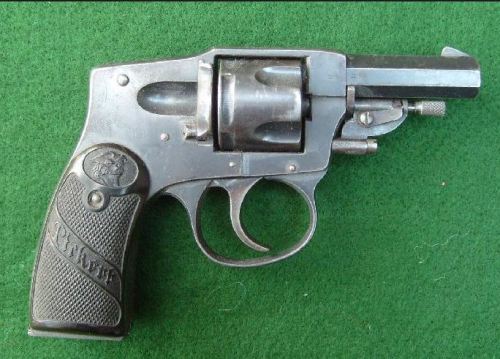 Speculation: this Arminius “Pirkert” .32 caliber revolver, Germany, 1920s, might have been the kind of gun my father bought before the Nazis took over Germany in 1933.

When the Nazis took control of the city of Mannheim in March 1933, they arrested the top Social Democratic leaders in the city government, including my father, Johannes Höber.   They kept him in what they called “protective custody” for five weeks, as previously narrated on this website here.  In the months before the takeover, Johannes had been involved in the militia arm of the pro-democracy coalition Reichsbanner Schwarz-Rot-Gold.  I previously wrote about that anti-Nazi paramilitary force here.  As part of his involvement in the activities of the Reichsbanner, Johannes bought a pistol that he took on forays with other Social Democrats to disrupt Nazi meetings.  My father was a little guy and descended from a well-to-do family of serious intellectuals and scientists.  He never seemed to me the kind of man who would engage in this kind of reckless activity, but my mother’s head-shaking bewilderment when she told me about it made it clear the story was true.

Johannes Höber with his daughter, Susanne, around the time he bought his pistol. In this picture he doesn’t look much like a candidate for an armed anti-Nazi militia.

My mother, Elfriede Höber, was a committed pacifist and disapproved of my father’s heroics with the Reichsbanner and especially disliked his keeping a gun in the house.  Even decades later, in America, there was a notable tension between them on the one or two occasions when the story came up.

Elfriede Höber around the time the Nazis arrested Johannes.

When Johannes was jailed by the Nazis, Elfriede was left at home alone with their little girl, Susanne, then 3.  The pistol was hidden in a stack of bed sheets in the linen closet of their apartment.  In the early days of the new regime, no one knew what to expect of the Nazis, but Elfriede feared they might come and search the house for contraband after Johannes’ arrest.  Terrified that the Nazis would consider the gun proof that Johannes was an enemy of  the regime, Elfriede decided  she must get rid of it. But how?  The solution that came to her was the bridge across the Rhine River, which had been rebuilt and dedicated in a ceremony just a few months earlier. 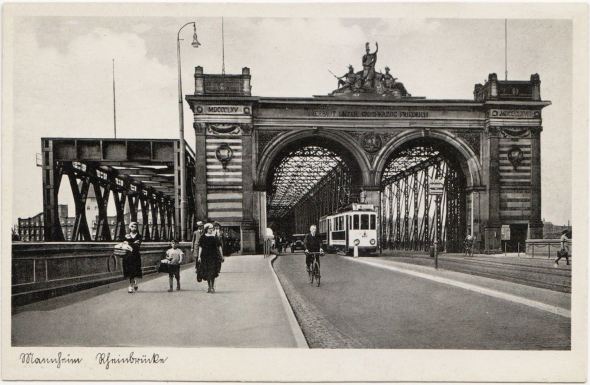 The bridge over the Rhine at Mannheim around 1934. Elfriede probably used the walkway at the far right to carry Johannes’ pistol onto the bridge.

To support her, Elfriede asked her best friend, Marianne Daniels, to go with her to get rid of Johannes’ gun.  The two young women retrieved the pistol from its hiding place in the linen closet and placed it in a plain paper bag.  At night, the two walked out into the dark city, anxious that they might be stopped by a roving squad of storm troopers.  After walking for half an hour along the bank of the Rhine, however, they reached the dark bridge unmolested.  Hearts pounding, they walked out to the middle of the span and dropped the bag with the gun over the railing.  It disappeared into the black waters of the Rhine.  For the moment, that peril was out of the picture.

Postscript:  Readers of this blog may remember that my dear friend Achim in Dresden has shown astonishing skill in recovering rare items related to my family’s history.  This year Achim found an extremely rare copy of the program  from the ceremony on November 19, 1932 dedicating the newly reconstructed bridge at Mannheim, where Elfriede later got rid of the pistol.  The program book was produced by the Press Office of the City of Mannheim, which Johannes headed at the time.

Program for the dedication of the new bridge across the Rhine at Mannheim, November 19, 1932.

Johannes Höber “Taken into Protective Custody” by the Nazis, March 13, 1933

The newspaper article pictured above comes from the Mannheimer Tageblatt, one of the major newspapers of Mannheim, a city of half a million people.  Dated March 13, 1933, the article reads as follows:

The Police Report states: Over the course of the last several days the following leaders of the SPD [Sozialistisches Partei Deutschland, or German Social Democratic Party] were taken into protective custody:

Protective custody was imposed on Mayor Dr. Heimerich at Theresa Hospital, where he is presently located.

The following individuals upon whom protective custody has been imposed have not been located: Senator Roth, State Representative Reinhold, the editor Harpuder, the editor Dr. Schifrin, attorney Dr. Kirschner, and reporter Diamant.

Adolf Hitler and the Nazis came to power in Germany in 1933.  In the rigged Reichstag election of March 5, the Nazis received a plurality (though not a majority)  of the votes cast and declared themselves rulers of the nation.  In the wake of this takeover of the national government, state and local Nazi groups attacked the seats of government in state capitols and cities throughout the country.  On March 8, local Nazis, supported by armed Storm Troopers and SS squads, forcefully drove the elected officials of Mannheim out of the city hall, burned the flag of the democratic Weimar republic in the city’s main square, and hoisted the Swastika banner on the city hall.

Johannes Höber, 29, was a promising young member of Mayor Hermann Heimerich’s Socialist administration when the Nazis seized control of the city.  He was also an activist in the German Socialist Party (Sozialistische Partei Deutschland, or SPD) and the Reichsbanner, the Socialist Party militia formed to protect Socialists from Nazi Stormtroopers.  Johannes’ “protective custody” in the city jail lasted five weeks.  At one point, Johannes and the other Socialists asked to be released.  In response, the Nazis took them to a balcony overlooking the courtyard of the jail, where a prearranged crowd of brown shirted Storm Troopers screamed for their blood, purportedly justifying the prisoners’ continued detention.

After he had been held for some time, Johannes’ father, Rudolf Höber, a professor of physiology at the University of Kiel, travelled to Mannheim to talk to the Nazi leadership there.  Rudolf negotiated a deal under which Johannes agreed to leave Mannheim and never return in exchange for his release from “protective custody.”  He and his wife, Elfriede, and his daughter, Susanne, moved to the north German city of Düsseldorf, where they lived for five years before emigrating to the United States.  In fact, Johannes did not return to Mannheim for 28 years.