Review of “Against Time: Letters from Nazi Germany, 1938-1939” from CHOICE, A Publication of the Association of College and Research Libraries

I am delighted that the following review appeared on May 1, 2016, in CHOICE, a publication of the Association of College and Research Libraries.

Francis Hoeber possesses, apparently, decades’ worth of materials from his family’s history.  However, he has chosen to publish only letters from 1938 and 1939, because they are truly exceptional in foregrounding human experience in the face of obliterating fascism.  His father, Johannes, had emigrated from Germany in 1938, with the idea that Elfriede would follow with their young daughter.  Complications arose.  Eventually they united, lived in the US, and raised their family.  That is a passive, objective summary.  In contrast, these letters, written by two literate, gifted writers, construct a deeply experienced history entwined with significant world events.  Genuine, emotional, human, rational—the letters exemplify precisely why published history needs such primary material. We can read or view synthesized historical accounts in textbooks or documentaries; we can summarize and categorize, intellectually.  However, only by absorbing the personal narratives of people who recount the events they lived through can readers approximate the feelings, the vibrant presence, the individual acts that enliven historical experience.  Through self-expressed microhistory, whether routine (running a business) or epochal (Kristallnacht), readers feel the macrohistory viscerally.  Hoeber provides relevant context in footnotes and summaries to orient readers.

More information about Against Time is available by clicking here.

You can order the book directly from the publisher by clicking here.

To all of you who are readers of this website, and who mean so much to me:

I am pleased to let you know that my book, Against Time: Letters from Nazi Germany, 1938-1939, about my parents’ flight from Germany to America just before World War II, will be published by the American Philosophical Society Press on September 1, 2015.

You are invited to join me for a reading and reception at the historic building of the American Philosophical Society adjacent to Independence Hall at 104 South 5th Street, Philadelphia, Pennsylvania on Wednesday, September 9, 2015 at 5:30 P.M.

In a nutshell, here’s the story of Against Time: My father, Johannes Höber, left Nazi Germany for America in November 1938. My mother, Elfriede, and my nine year old sister, Susanne, were unable to leave until nearly a year later. Fifty years later, I found an old folder containing the long letters Johannes and Elfriede exchanged during the anxious months they were separated. In these letters, Elfriede describes the worsening situation in daily life under Hitler’s regime and Johannes describes his rapid entry into American political life in Philadelphia. Against Time collects those letters with an introduction, notes and an epilogue that set the letters in the context of their time. Johannes and Elfriede were both political scientists and activist Social Democrats, so their letters are of more than just personal interest. Together, the letters tell the intense story of a remarkable couple in one of the most tumultuous periods in world history. You can learn more about the book and read excerpts and view the illustrations at www.againsttimebook.com .

Against Time: Letters from Nazi Germany, 1938-1939 is available for ordering at a pre-publication discount from the American Philosophical Society Press by clicking here . Copies are set to be shipped on September 1.

Thanks so much for your interest.

The Fischer Family is Homeless, Düsseldorf 1943

Although Johannes and Elfriede Höber succeeded in escaping from Germany with their nine-year-old daughter Susanne before War War II, Elfriede’s mother, Clara Fischer, and her three brothers remained behind.  In 1943, Düsseldorf, where Clara lived, was heavily bombed by United States and allied forces.  This photograph was taken from the ruins of Clara’s apartment, showing the destruction of the city.  Having lost everything, Clara fled with her two grandchildren to the comparative safety of a small town in the Alps, where she lived out the rest of the War. 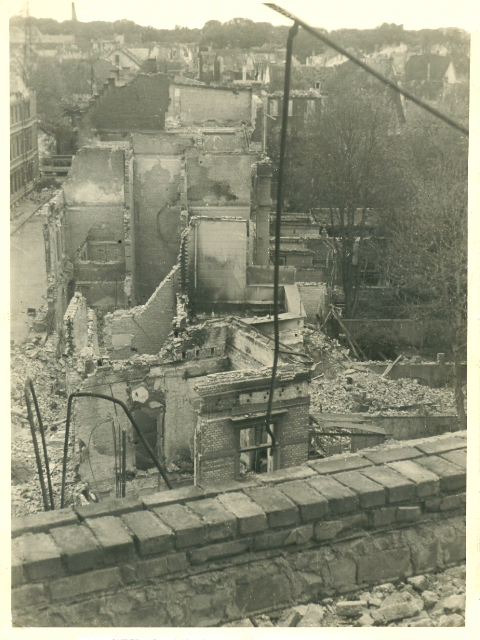 A Slip of Paper Tells a Story

This slip of paper was found in an old file belonging to Johannes and Elfriede Hoeber.  Before they left Germany in 1939, they placed everything they owned in storage, including nearly a thousand books, antiques and irreplaceable historical documents.  This paper was prepared on September 9,  1943 but probably did not reach Johannes and Elfriede until after World War II ended in 1945.

Translated into English, the memo reads as follows:

We hereby notify Dr. Elfriede Hober, nee Fischer, formerly residing at Pempelforterstrasse 11, Duesseldorf, that the furniture, furnishings,  books, etc. stored with us were destroyed in the last terrorist attack on the night of 12 June 1943.