← A Story in Some Grains of Sand
Review of “Against Time: Letters from Nazi Germany, 1938-1939” from CHOICE, A Publication of the Association of College and Research Libraries →

The Dark Humor of a Nuremberg Prosecutor — 1945

Robert Kempner was my parents’ friend and, like them, a Social Democrat and activist against the Nazi Party before 1933.  Like them, he fled Germany for America before World War II.  At the end of the War the U.S. government recruited Kempner, a lawyer, to be one of the lead prosecutors  at the International War Crimes Tribunal in Nuremberg. The fact that he was bilingual made Kempner particularly effective in cross examining the Nazi leadership.  He also was a witness against Adolf Eichmann in Jerusalem in 1960. 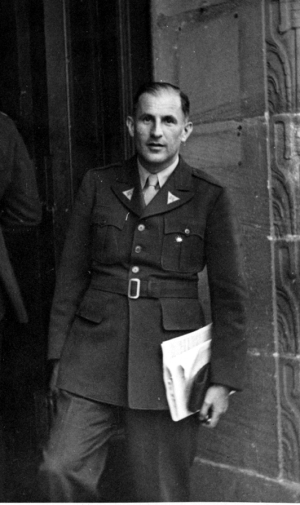 Robert M. W. Kempner when he was a prosecutor at the International War Crimes Tribunal, Nuremberg, 1946.

While my parents were able to escape Germany before the War, my mother’s mother and three brothers were trapped there for the duration.  After the war, communications between Americans and German nationals continued to be restricted for many months.  Desperate for news about her family, and unable to communicate through civilian channels, my mother wrote to Robert Kempner in Nuremberg asking him to find out if they were alright.  As a prosecutor, he had access to the American military mail system, and wrote my parents an extraordinary postcard in response. The original is preserved in my family’s papers. 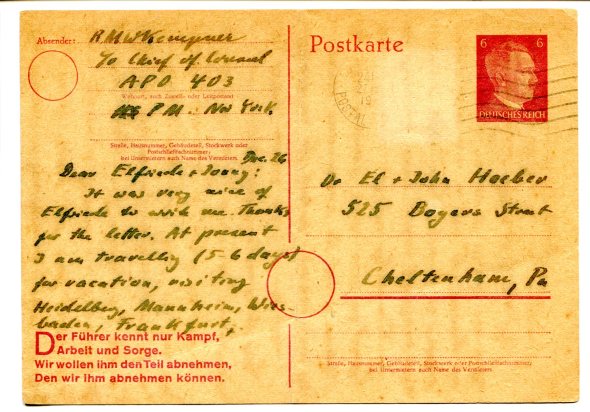 The first surprising thing is that Kempner used a Nazi-era card with an Adolf Hitler postage stamp.  There is great irony in the inscription on the lower left: The Führer knows only war, work and care. We want to take whatever part [of that burden] off him that we can.  By the time this postcard was written, the Führer’s cares were long over, since he had killed himself more than six months earlier when the Nazis were crushed by the Allies.

The trial of Major War Criminals had begun on November 20, 1945 and would continue until the end of the next year. There was evidently a Christmas recess in the proceedings, since Kempner writes that he was on a vacation trip (!)  to places like Heidelberg and Mannheim where he and my parents had been associated in anti-Nazi activities years earlier.  Note, by the way, that Kempner wrote in English, even though his and my parents’ first language was German.  American military censors would probably not have allowed letters through if they were written in a language other than English. 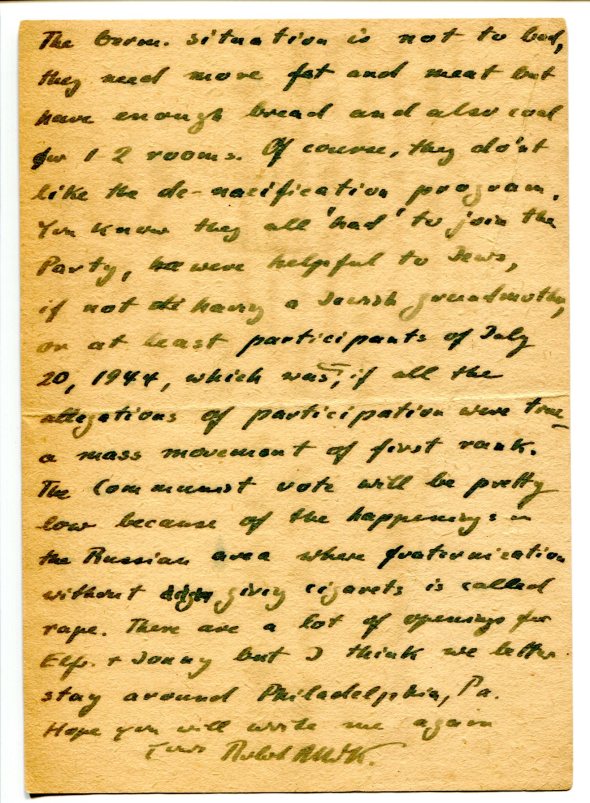 Reverse of Postcard from Robert Kempner to Johannes and Elfriede Hoeber, December 26, 1945.

Kempner did not respond directly to my mother’s questions about her family (he probably wasn’t able to contact them) but he responded to reports of widespread starvation and freezing conditions in the war-devastated country.  This was probably my mother’s biggest concern and Kempner wrote, “The Germ.[an] situation is not to [sic] bad, they need more fat and meat but they have enough bread and also enough coal for [heating] 1-2 rooms.”  Overall, though, Kempner shows little sympathy for the suffering of the Germans, far too many of whom denied any involvement in the nation’s atrocities.  Here is the full text of the postcard:

Dec 26
Dear Elfriede and Jonny:
It was very nice of Elfriede to write me.  Thanks for the letter.  At present I am travelling (5-6 days) for vacation, visiting Heidelberg, Mannheim, Wiesbaden, Frankfurt.
The Germ. situation is not to[o] bad, they need more fat and meat but have enough bread and also coal for 1-2 rooms.  Of course, they don’t like the de-nazification program.  You know they all ‘had’ to join the Party, were helpful to Jews, if not having a Jewish grandmother, or at least participants of July 20, 1944, which was, if all the allegations of participation were true, a mass movement of the first rank.  The Communist vote will be pretty low because of the happenings in the Russian area where fraternization without giving cigarettes is called rape.  There are a lot of openings for Elfr. & Jonny but I think we better stay around Philadelphia Pa.  Hope you will write me again.
Yours,
Robert MWK

“July 20, 1944” refers a failed attempt by eight military officers to assassinate Hitler.  After the war, totally unrealistic numbers of German claimed to have supported it.

The comment about the Russians is unclear, but it was well known that the occupying Soviet Army committed massive rapes of German women, including elderly women and young girls.

Kempner’s comments about “lots of openings” refers to the fact that, as exiled Germans committed to democracy, my parents would have opportunities in a new government to be installed by the Allies — but Kempner didn’t recommend it.  In any event, my parents never considered returning to the country from which they had been driven out.

It was an idiosyncrasy of Kempner’s that he addressed my father as “John” or “Jonny.” My father was adamant about not Anglicizing his name, which was Johannes. During his lifetime Robert Kempner was the only one with the temerity to address him as John.

Years later, Robert Kempner successfully sued the German government for restitution on behalf of hundreds — perhaps thousands — of victims of the Nazis, primarily in Israel and America.  My parents were among the clients for whom he secured some compensation from the German authorities for the losses they had suffered.